coming up for air

Well,  you may have noticed that the Bottom Feeder has been dark for a period of time.   You may have wondered where the Feeder went, and may have even looked in things like: 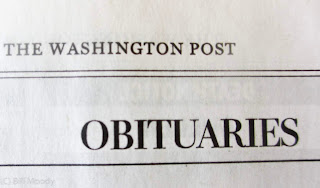 So I’m happy to report you won’t find him there either, nor would you find him in the patient log of Johns Hopkins Hospital.   No, there is a much happier explanation which recently concluded with 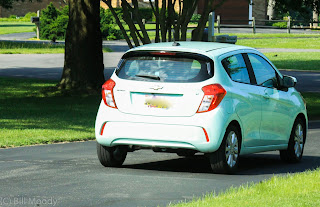 with FOJTY leaving in his “mint chip” rent-a-racer

Both sons were so gracious as to spend some of their time coming out here and seeing us and doing the long list of chores that were generated by MFO and myself.  Part of which turned into a “Staining the Fence” operation which turned out to be much more work than planned, but it does look nice.  Also both are accomplished grill masters and we were able to have several good meals thereby, with local beef.   We also had a special treat when a friend obtained some dry aged strip steaks

And came and grilled it for us.  Over used term, but actually was some of the best stuff I’ve ever put in my mouth.  What a treat!

Having them visit tugged at our heart strings, and thoughts of “moving back” have begun creeping in our brains, but that’s a whole different story.

Well, if your memory is really sharp you may remember I was yakking about Objective A or something which got shoved into the background.  Although not quite as glorious as family visits, it does keep rearing its head.

As I spend a lot of time pushing words around I pay attention to popular usage, and current trends.   I personally try to say what is on my mind, being as literal as possible. Just say what you mean!  For instance, there are phrases creeping in that drive me nuts.   Here are but a few that particularly drive me nuts:

Me: so how did the event go?  Did you make some money? Or how did you do on your exam?
Millennial:   I crushed it!!
Me:  I’m sorry to hear that, were there any injuries?  Were you arrested for damage of property?

Me: what are the objectives for the next
Mill: we’re taking it to the next level!
Me:   Huh? Where are those levels written down?

Me: How are the new rules of procedure for the meetings working out?
Mill:  they’re a real game changer!
Me:  oh, I thought we were doing rules for procedures.  Are we doing something different now?

Me:  Could you tell me what (so and so) said?
Mill: sure, I would be glad to share it.
Me: great, but could you just tell me?

And lastly (for now) one from the world of sports, usually in reference to a football running back:  “he just gets stronger as the game goes along!”  Huh?  How is that physically possible?

Now, I should hasten to add that several of the loyal readers sometimes use these phrases, but i think that's largely because of the reality they operate in.

Anyway, just say what you mean, don’t add frills!  It could be a game changer for you!

And really lastly, I’ll probably get in trouble for this, but I lost respect for the USA women’s soccer team in the world cup.  I know others won’t share the same opinion and accuse me of being “soft” or “fuzzy”.   I was very embarrassed for Thailand’s when our players jumped around, hugged each other, and carried on after scoring the 13th goal on an obviously vastly overmatched team.

I think they toned it down a bit lately, for which I give them credit.  Soccer is a funny sport in a lot of respects, but I kind of hate to see games swing in the balance of one official’s subjective view of play.  VAR helps, but when you see goals (and games!) taken away because “her heel was just an inch away from the line”.  And the only reason USA (USA…USA…USA) won yesterday was because they were awarded two penalty kicks.  No clean goals.  LeBron always gets the calls!

Okay, the Feeder should be back on the proverbial horse now, ready to go to the next level!

And a huge thank you to both FOJ’s for helping us out.  We certainly will do everything we can to remain in the digs and my continual reminder to
DFD
And NMMJ

Ps a subject for future posting was a wine dinner at Elements, and a dinner at CD cafe

Posted by Bottom Feeder at 12:37 PM No comments:

Labels: family, this and that

Well, I was poised to go back to Blog Objective A, but maybe “C” trumps (er, maybe overides it).   This day marks the 75th anniversary of the invasion of France at Normandy, normally termed “D Day” Seems like it is fitting to honor those who gave their life to (ultimately) turn WWII in favor of the Allies.

Five years ago, MFO and I were part of a tour group to France which included the Normandy region, led by none other than Chef Loic Jaffres.  Looking back, it was a memorable trip, both for food and also the historical significance. 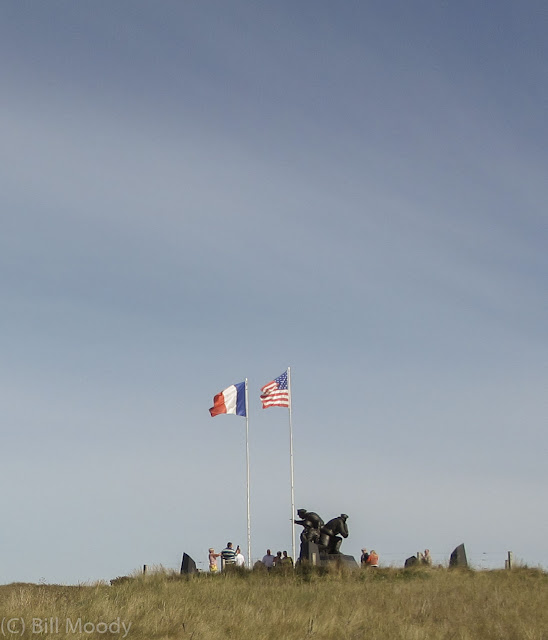 As with all memorials to solemn pieces of our history, it was a sobering experience to see the place where so many Americans did the ultimate sacrifice for our country.

With all the media coverage today, you might have seen a picture similar to this today on TV: 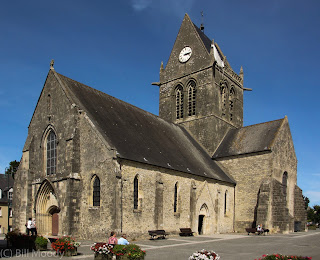 Depicting the incident of an ally parachute soldier got entangled on the roof of a church in Ste. Mere Eglise, and they have recreated the scene.   As I recall, the soldier did not perish and had a story of his own, but he will be memorialized forever on this church and in this town. 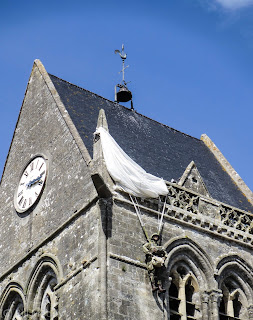 There are several memorials honoring the Americans 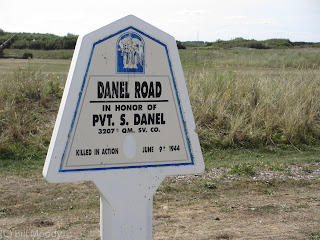 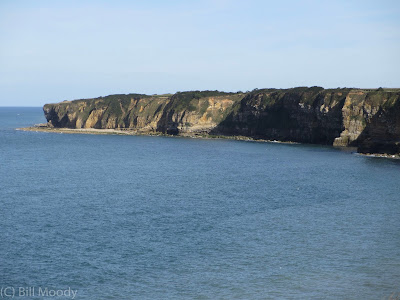 In the town itself, there are cemeteries for the fallen 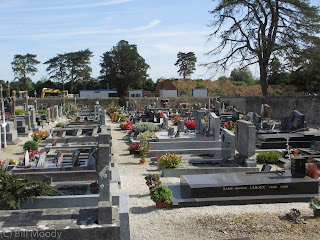 With graves marking the final resting places of the soldiers 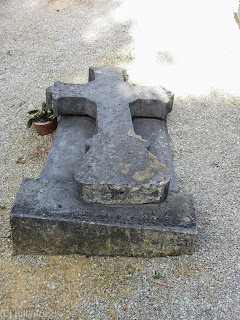 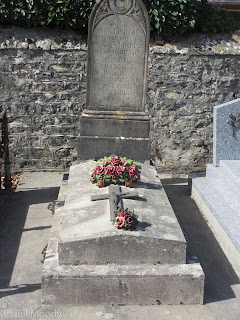 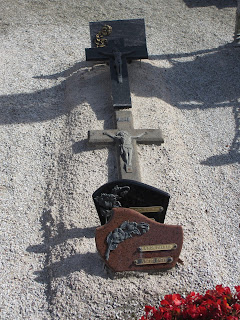 Some of the museums had dioramas depicting various actions 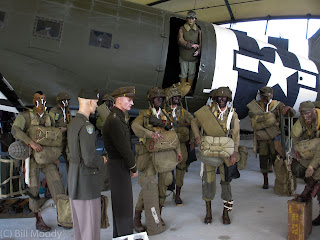 After experiencing the poignant memories of the invasion, it was time for……
LUNCH!
The town is also for famous for And the bakery has a restaurant associated with it, with the typical French custom of presenting the menu in usually lovely handwriting on an exterior chalk board 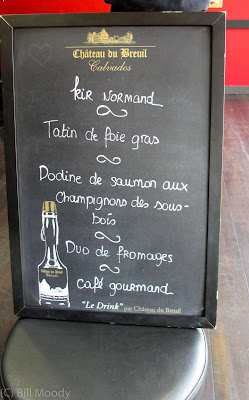 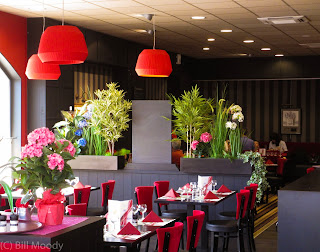 Being a large group, we all had the same courses, one of which was Dodine de Saumon.  know what that is?

“The recipe of the Dodine Sauce is one of the most ancient in the history of French cooking. We are first given it in Le Grand Cuisinier de toute cuisine, which dates from about the year 1350, and there are many recipes for it in other fourteenth- and fifteenth-century cookery books.”

You should know what the “Champignons des Sous Bois” is.  Anyway it was a lovely dish 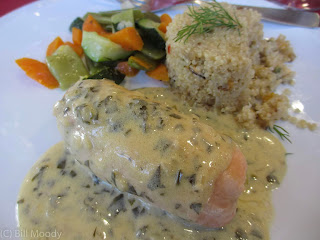 Served of course with the always delicious French Baguettes 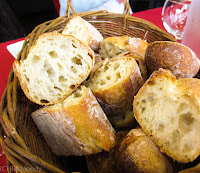 After lunch we “toured” the bakery shop 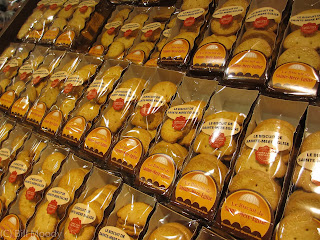 It’s nice to dredge up old memories
Although we were touring, we were suitably
DFL(unch).
By golly those French do it right!!

Posted by Bottom Feeder at 6:16 PM No comments:

Way back in 1991, nearly 20 years ago, I accompanied MFO (before she had that tag) and a group of Law Librarians from St. Louis University attending a conference in New Orleans.  I had many good memories (and lunches) from that experience, one of which came into sharp focus recently.  One evening we attended a “group dinner” at a restaurant called “Dookie Chase’s” in kind of a (then) run down part of town. Turned out to be a memorable meal and experience, with great creole food.   Plus we got to meet the chef/owner Leah Chase.  A charming woman with a love of life, food, and good cooking (often referred to as the “Queen of Creole Cuisine)”, you can read more <here> about the restaurant, the family, and her life story) she had just published a cookbook which of course the fledgling Bottom Feeder had to get: 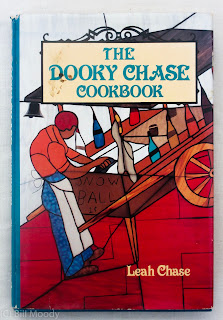 As with all things, life turns the pages for us, and she passed on June 1st at the age of 95, and I dug out the cookbook and had a fresh look, and was quite taken by her inscription to me, which now, 27 years later popped out with her message clear and in line with my beliefs: 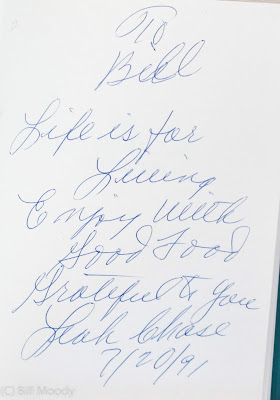 The book itself is not only filled with great (annotated) recipes 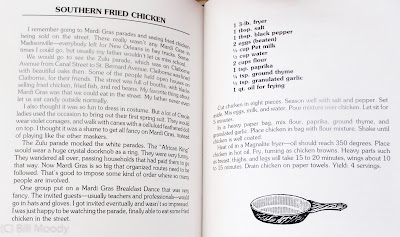 Note it calls for Pet Milk!

But also has lovely art in it 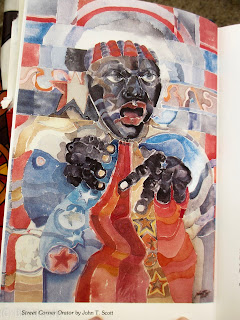 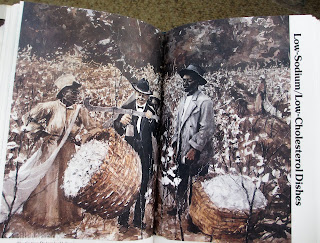 Borrowing a phrase from their website “She was a major supporter of cultural and visual arts and an unwavering advocate for civil liberties and full inclusion of all… While we mourn her loss, we celebrate her remarkable life, and cherish the life lessons she taught us. The Family will continue her legacy of “Work, Pray, and Do for Others.”
Grateful To You,
The Chase Family”

Anyway, a great lady who lived the life of good times and celebrated food.  RIP.

And another icon (to me) of a different sort who hopefully has a seat at her table in heaven also left us on May 30 at the age of 69.  Without reading the caption, do you recognize 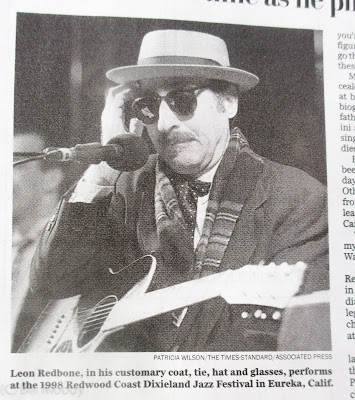 Yes, the unique and staunchly individual Leon Redbone took his guitar and moved on.  He will never be replaced.  (As I remember) I never had the pleasure of seeing him perform in person, but you hear him from time to time on the Blues Channel (74 on Sirius XM)  a talent like no other..

End of unexpected Objective B.  Objective A was to rant a bit about phrases that drive me nuts (short commute), such as “reach out”.  Seems kind of inappropriate at this point so we’ll end with the usual admonishment to
DFD (maybe in honor of Leah’s food)
And if you look at the photos of her restaurant, you will see NO MJ’s!


Oh, just to add a little lighter note, another bit of "Bird Banter" 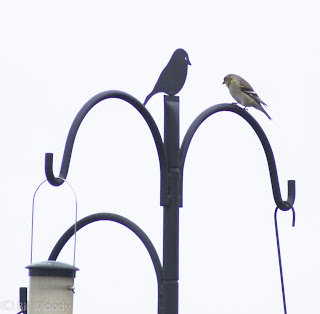 Posted by Bottom Feeder at 10:17 AM No comments: