Marching backward in time, let’s take a quick look at this year’s Christmas dinner.   Like this year’s Thanksgiving, we tried something “completely different”.  I think I mentioned we had a smallish chicken 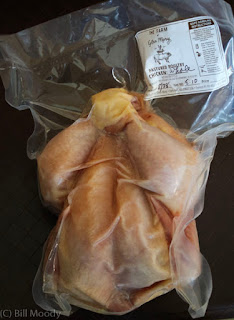 from the “chicken lady” from the Farm at Glen Mary in nearby Park Hall, just down the road from us. They specialize in grass fed cattle, pastured pigs and poultry, with no antibiotics, all that stuff.  I decided to brine it in the stuff I showed you before 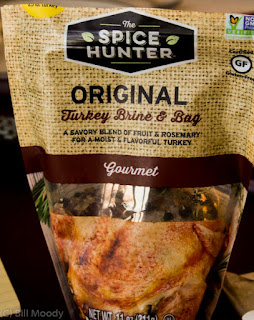 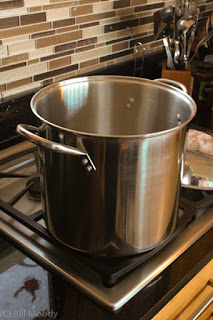 So on Christmas morning, we began the day with a Feeder Frittata 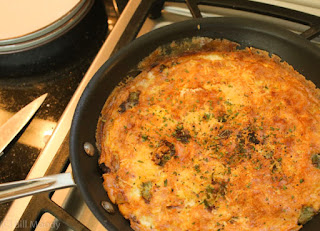 Along about two in the pm we decided to begin the process of preparing the chicken for dinner.
Out of its bath 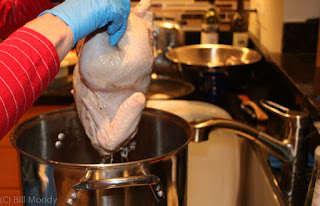 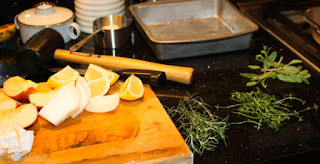 A light treatment of lemon juice 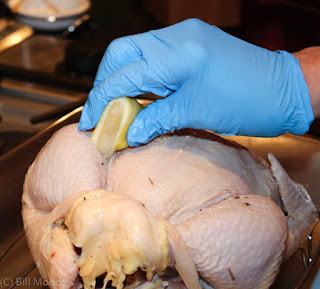 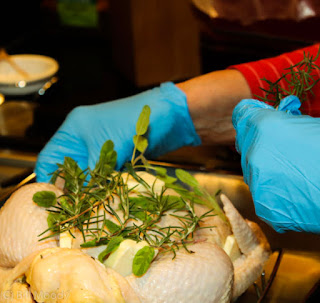 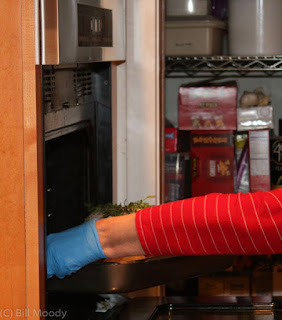 Until “an instant read thermometer placed in the thickest part of the thigh reads 160” to which we cheated a bit, figuring residual cooking would take it over the top. 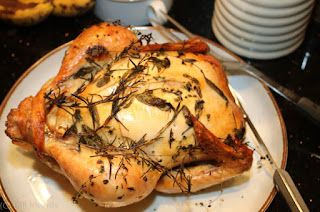 It did leave kind of a mess in the kitchen (for the cleaning crew, i.e., us). 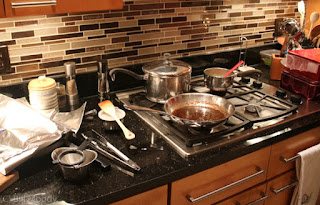 So how did the bird taste?  To be honest, I expected better results.  It was good, but not extraordinary.  The brining didn't seem to have much effect, it could have been that it cooked too long (although the thermapen belied that) I don’t know.  Flavor was good, but a bit chewy.  I will try again and pull it earlier.  It was my first experience with a pastured bird.  So nice to have a local option available.  Hope you get a chance to try their stuff.

Comings and goings
Actually, comings and comings.   Sources tell me that:

The venerable Doo Dah Deli will return to Leonardtown in the little complex (is that an oxymoron?) as Jessie’s and Smokey Joe’s on the Town.  They will look for a luncheon business only (Dunkin’ gets put in the lease that they can’t do breakfast)

The now shuttered old Kevin’s Café (migrated to the Willows) will become the Slice House, allegedly serving “authentic New York” … guess what?   Have you ever heard somebody advertising “serving unreliable imitation Chicago….”

There’s also a couple of new Asian places nearby, one in San Souci (think Bay Dawgz) and across the road next to Jerry’s and Little (pizza pizza) Caesars.  Have to go look a bit more closely but think like Mongolian BBQ.  Revolving doors for those places.

The Shopper’s Food Warehouse currently located in San Souci plaza will move out by the end of January to be replaced by a Weiss (presumably the one in the Hobby Lobby group).

Posted by Bottom Feeder at 5:04 PM