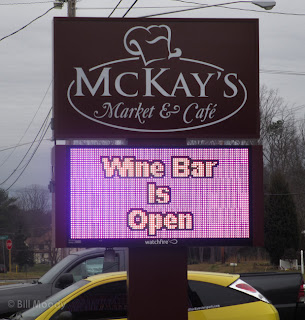 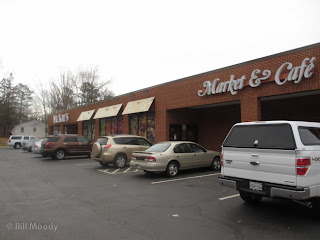 Spurred on by comments from several (thank you) readers, I decided it was time for the Feeder to make a visit.

Apparently not everyone (in fact most) share the opinion that it is NOT (as reported here) a "Woodburn’s Two".  So i figured it was time for first hand research.  MFO and I are hosting the annual “raising of the tree” ceremony at the digs this weekend, and we decided maybe we would check out the place and perhaps get something nice for the tree raising team.  So we climbed in the MOMSTER II this morning, and hiked (yes, mixed metaphor) over to the new place near Leonardtown.

The exterior of the store has not been altered (other than signage), so you still enter through the “middle” into the store.  Once inside it is very inviting, although maybe a bit tight but not annoyingly so (despite quite a few case stackings on the floor). 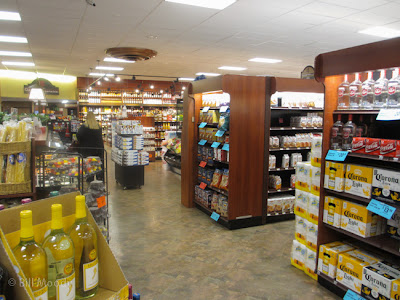 Broadly speaking, the layout consists of three main areas:  The “deli” end to your right; 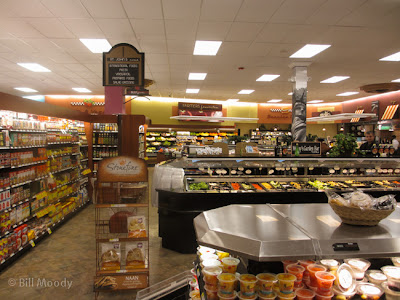 the groceries in the middle; and the liquor area on the left.  Around the perimeter are the proteins (meat, fish, and poultry) and fresh products.  I think they have done their demographics pretty well, as by far the largest spaces are devoted to the "deli/grab and go" section and of course liquor.

The deli section obviously caters to those wanting to get something for taking out (although there are tables to sit if you wish) and there are large hot and cold “bars” filled with almost anything imaginable..  even a “Southern Rotisserie Bar" 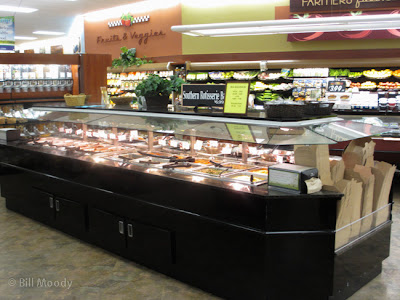 loaded with chicken wings and pieces of different preparations..  There is also a massive salad bar, with soups, chili's, and so on.  We were there fairly early in the day, but everything was well stocked, looked fresh and appetizing.  I suspect one could pick up a pretty good meal.  Off to the side was the “deli” where you could order sandwiches (and most likely Panini’s), and behind that the place you could order a pound of sliced meats and cheeses.  I noticed that they also highlighted special restrictions (which somehow McKay's have always paid attention to) 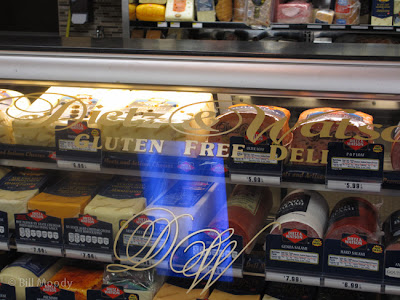 A first quick remark here about comparison between the “old” and “new” places.  As I recall the last ditch Woodburn’s in Calvert had Boar’s Head deli products while the new place features Dietz and Watson, not quite the same (IMHO).
Further along the “back wall” there are the fresh meats and seafood, and I think if you closed your eyes, at least the meat station is equivalent to the old place.  They feature Certified Angus Beef, which is good.  Some have drawn comparison to Nick's, but I'm not sure about that.  Certainly you can't get a twenty pound bag of chops here (at least without asking) 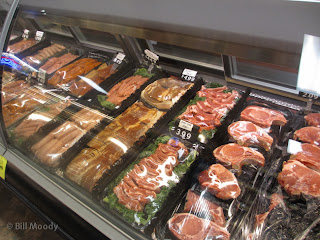 It may be just me (and my famous faulty memory) but it sort of looked like the fish counter had maybe a little less selection, although it looked very nice.  Just past the meats is the cheese counter.  Here again, I thought the selection was not nearly as wide as I remembered.  While there were many “imported’ cheeses, I couldn't find a Morbiere for instance.  There were some specialty cheeses, but also a lot of Cracker Barrel and Shurfine.

We didn't prowl the dry goods very much, but I suspect it is adequate for most shopping needs.

Which leads us to the "beverage" department.  I always get led to that department, and there are plenty to be drawn to. There is a huge selection of beers, many of them local “craft beers” such as Heavy Seas, Flying Dog, and so on.  Also a lot of hard liquors with prices I thought competitive in my experience (fairly extensive).  I am not sure who the ladder is for, not me, certainly 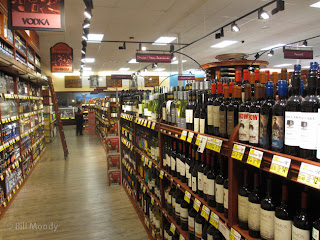 The selection of wines is maybe commensurate with the rest of the store, some Barefoot/Yellow Tail type wines but also a fair amount of “nice” wines of respectable vineyards (like these Pinot's). 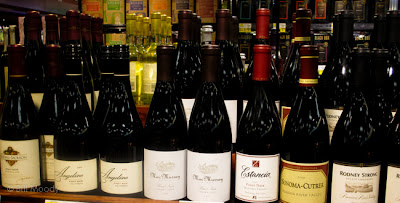 There was a couple of sections devoted to "blush" or pinky wines which I will summarily ignore. Most of the prices are below thirty although there were a (very) few bottles of pricier cabs 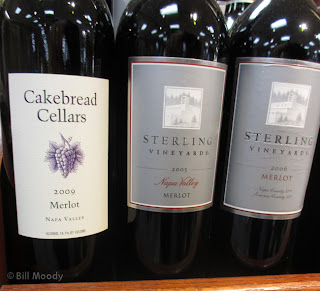 for over fifty bucks (nice vintages!), if you want that.  Sparkling wines a-plenty, but mostly leaned toward the Freixenet variety.  Again, something nice to drink but not for special occasions.  That's okay, I think they have about the right selections.

Which then leaves that “wine bar”: 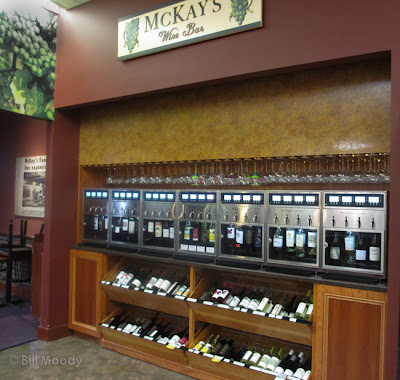 It is actually rather nicely done, and despite a snarky remark I got about “wine from boxes”, you can see that it is far from that. There are 28 options available, white, red, various countries of origins.  They even have a “menu” which describes the wines available: 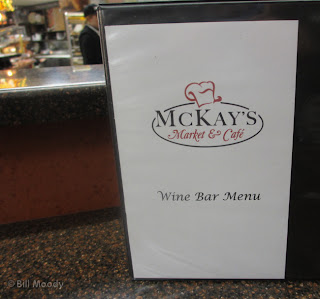 A high tech operation to say the least, with actual bottles. You can select the amount and price from the little window above the bottle of choice (kind of like picking your octane at the gas pump).  I think there was a “taste” for a buck, maybe an ounce then I think a “Tasting” amount and lastly a full glass.  There is a little seating area in which you can sit and enjoy your selection.  Another unverified report said you could sip while you shop, but I didn’t investigate that option.  Perhaps the reason for another trip.

So, after our visit, I would have to agree that it is not exactly Woodburn’s Two, but it is pretty damn close. Probably close enough.  I think it’s a great addition to our grocery options and worth maybe going to/coming home from Leonardtown a different way.  Go take a look for yourself.

And thanks as always to those who took the time to comment!!  Kind of a puzzler to
DF(?)

PS: yes loyal readers, Clarke's Landing is the name I have heard in conjunction with the "new" lighthouse..

Posted by Bottom Feeder at 6:37 PM