Forth on the Fourth

WARNING: if you are seeking Michael Jackson tickets you have reached this site in error.

Sheesh.. don’t turn on the telly until after Tuesday. Too much!! Nuff said.

A busy weekend on the Nation’s Birthday, starting out with the River Concert at St. Mary’s College Friday night. I was “working” in the adult beverage booth for a local charitable organization, and it was by far the busiest concert I’ve ever experienced. Pouring from beginning to end, needing a run for more wine in the middle. People were sitting in places that have never been occupied in years past. I couldn’t hear the music (they mercifully removed the speakers that have been blaring in years past) but the fireworks were nice. Always a good place to see friends.

Out of chronological order, but I spent a couple of sessions doing docent work at the reconstructed Chapel down at Historic St. Mary’s City. I suppose it’s not news to anybody who works retail or something, but it never ceases to amaze me about people. It’s so fun engaging them in conversation and finding out about them. During the course fo the weekend, I met an Architect from Annapolis, an Archeologist from (somewhere), and a couple of families interested in tracing their ancestors. One set was looking for the St. Josephs Cemetary which was located by a quick call to MFO, the expert. I also met a couple from Britain that said that in his country (tongue in cheek – I think) that July 4th was called “Thanksgiving”. Fun stuff. Everybody has a little different interest in the Chapel, some want to know the history of the original; others are more interested in how the reconstruction worked, who paid for it, and so forth. You just keep talking until you find out what interests them the most. I also am confirming my theory that as you age, you develop more interest in history. It always seems that the golden agers are most passionate about it. And, it never ceases to amaze me that some people just walk down the trail, glance at that imposing and beautiful structure, and just keep going. To each his own, I guess. Drop by and see me sometime, mostly in the pm on the weekends.

Saturday night we watched the fireworks from the backyard of the digs, accompanied by some neighbors and friends. I think there were more aquatic watchers than ever before also, with boats almost coast to coast in front of us. Fireworks technology seems to continue to evolve as this year there were some that formed an outline of a star upon detonation, others had concentric circles, along with the usual cascade of glittering fire. Not quite talented enough with my new camera, so I borrow a shot from a friend.. 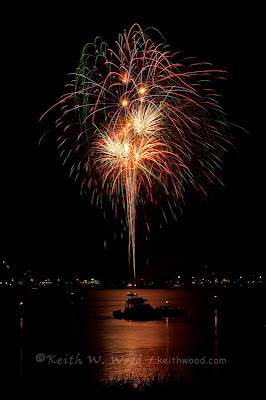 In general, culinary interest took a back seat to other events, although we did have a nice dinner of “Bill’s Brats” over the holiday, they are the best. Only Johnsonville please! MFO also made some appetizer tartlets of caramelized onion, walnuts, and blue cheese that were quite tasty. I was going to attempt my yearly batch of ribs, but maybe the subject of another entry.

I also had a back channel note of a dining experience of a friend that I’ll pass along. An order of (Wasabi) sea scallops was delivered to the table, and after enjoying the first one, the diner was surprised that the meat of the second was pink. Uneasy about consuming it, she left it. The staff asked if something was wrong, and did the right thing by offering a replacement (and even took something off the bill), and along the way the manager said they get about 4 or 5 occasionally in the bags they get and nothing was wrong with them. I did a little poking around, but I am unable to find any helpful information. (Googling “pink scallop” reveals there is a pacific ocean variety, but I don’t think it applies). Anybody have a similar experience?

Also we see that Joey Chestnut retained his dog eating trophy at the Nathan's Hot Dog eating contest last saturday. He gobbled 68 of them (with buns) in 10 minutes, besting second place by 3 and a half wieners. Looks like the "Black Widow" is fading as she came in 6th.

So another July 4th weekend comes and goes. Breakfast at Wimbledon was enjoyable with that epic match between Roddick and Fedderer, and Saturday’s edition of the screaming match between the venerable Williams sisters, Ho Hum, Tiger wins again while his opponents “fold like a cheap lawn chair”. Life marches on. C’mon Labor day!

DFD
Posted by Bottom Feeder at 7:47 AM