With a forced re-commitment to the kitchen due to MFO’s temporary outage, I decided to debut with some grilled pork chops. Brined, rested, and rubbed, I committed them to the hot (a euphemism in my case) grill for marking, then finished them off at a lower heat. All that effort resulted in the feared but not unexpected tough hunk of protein. Tell me again what’s so bad with fat?

Anyway, that created some leftovers and, after some consideration, I thought maybe by slicing the pork thinly and using a little sauce to provide some liquid, it might make a passable dish. After some looking around at resources, I found a simple sauce that turned out well and even came up with a nice little kitchen technique (at least for engineers who cook).

The sauce was termed “Mustard Tarragon Sauce” and was part of a Roast Pork Tenderloin recipe, so at least I was it was for the right (other white) meat. Here’s the recipe, with simple ingredients and prep:

Boil cream, broth, tarragon, in a heavy medium saucepan until reduced to 1 cup, whisking occasionally, about 10 minutes. Season to taste with pepper.

And therein lays one of my perennial cooking dilemmas: that dreaded phrase: “reduce to”. It’s either “by half”, or “to about”, or “until…”. It drives me nuts. What’s that? How do you measure “about”? Possessing no real cooking talent, my hope for success lies in the belief that if I follow the recipe exactly, the results will take care of itself. Which is probably why I’m doomed to writing about and appreciating good food rather than creating it.

So, upon pondering the “reduce to one cup” requirement, I came up with an idea. I got my reduction pan (which I don’t like very much because it’s tippy when empty), and filled it with a (carefully measured) cup of water. 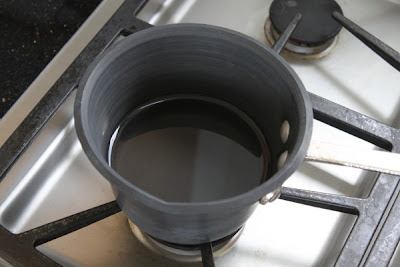 I then took a wooden spoon, inverted it into the pan, and noted where the water level was on the handle, 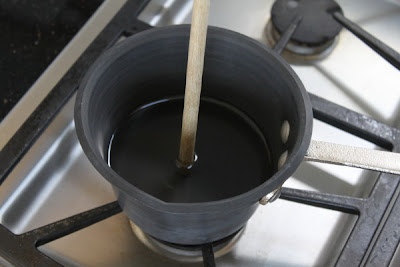 then used my trusty pocket knife to carve a little nick in it at the proper level. 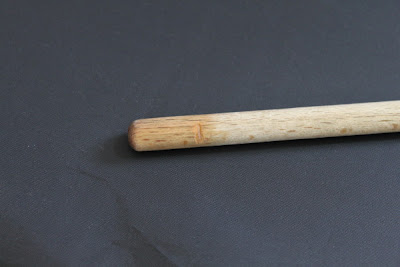 I then assembled the ingredients for the sauce. I used fresh tarragon from the garden, heavy whipping cream, Swanson “All Natural” Chicken Broth – note no mention of low sodium – and Gray Poupon. Not pictured is the mis en place wherein everything is measured before the actual fabrication begins. 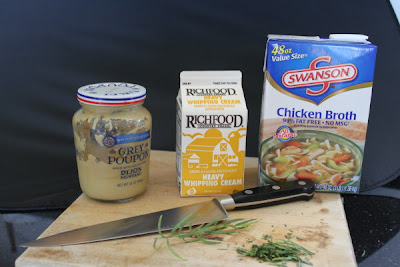 So, dumped all in the pan, brought to a nice boil, and metered the reduction with “the stick” until the (non-boiling) level creased the mark, and, voila! A very good sauce, with great texture and a nice kick from the mustard and tarragon. I using the fresh tarragon is essential, and maybe the sauce would be further improved with real chicken stock instead of from the box. A possible application – and example of the sauce: 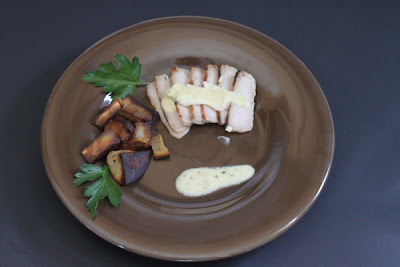 I think this sauce would go very well with poached salmon, maybe a nice twist on Eggs Benedict, and certainly if you could get pork that tasted like anything, it would be a nice addition to that. If you wanted a more formal presentation you could strain it to get the little bits of tarragon out of it. Try it. It’s easy and good (as much as I hate to use that “easy” word, but it is). If you use the “reduction meter” tip, remember that it is only good for that pan…but there is more than one wooden spoon.

And, after you construct the sauce, whatever you use it on,

Great idea, great pictures. what was the choice of wine for the dish? FOJTE

A "Morning Fog" Chard by Wente. Nothing overboard, just an above average everyday wine