This, That, and Monday..

Editor's note: Today is the 200th post since moving to cyberspace...thanks for hanging in

Before we got de-railed with the celeb chef goings on, I did attend the annual Christmas open houses of Contractor B and C on Thursday. By now, the little pigs in blankets and Contractor B have cooled along with some of the memories. As is the wont with contractor B, the event is completely catered, and was pretty much a carbon of last year. A center table with steam chafing dishes containing crab dip, barbeque, cheeses, and one more, with passed (little) pigs in blanket, shrimp, and some phylo raspberry items. Eventually there were some “oyster sliders” passed, which I hope have seen their last. More bread than oyster, more breading than oyster. On a side table was some lumpia (the definition of which is left as an exercise to the student), resembling cigars, but definitely tasting better. Wines and beers were available. A nice social occasion, but the food was exactly what was expected, good, but not memorable.

Walk across a the parking lot to Contractor C (CC). Again, format was the same as in previous years, kegs in back, wine in front, and a number of tables in the large conference room and dessert meeting rooms on the sides. I have to give the wine nod to CC, they had some very drinkable Ch. St. Jean chardonnay along with some Riesling, an uncommon but pleasant thought. There was a red, but I missed seeing it. The food again pretty much was the same format, but what continues to distinguish CC from CA and CB is that the employees actually contribute some dishes. There’s always some crock pot items of meatballs, barbeque, hot pots, stroganoffs, etc., along with little plates here and there of "stuff"..... Wait! What’s this over on the side table? A little (obviously home brought) dish of reddish green stuff with a sliced baguette and there it was... A little tent with nicely lettered “Sundried Tomato Pesto”. Somebody cares and is proud enough of their efforts to tell you what it is. It was very good Pesto, made all the better by knowing somebody took the trouble to help you appreciate it. There was also another little sign for some “Cheesecake Biscuits”. That’s why you come to these things and look at everything. Someplace there’s somebody who cares about food. So, when you’re taking part in one of these events, do your best, cook your favorite and let people know what it is! Don’t just show up with a plate of McKay’s stuffed ham, or worse yet, that plastic tray of awful dried out carrots and veggies with a center bowl of that dip that nobody knows what is or likes. Contractor C carries the 2009 prize! Congrats CC!

A beautiful Saturday morning was spent moving the patio furniture from the periphery of the gray lagoon to its winter location of the screened in porch. Okay, winter, do your worst!

In the afternoon, we attended a performance of Handel’s Messiah, presented by COSMIC (Chamber Orchestra of Southern Maryland, In Concert). Normally, in the holidays, they do the Nutcracker, but this year decided to do the Messiah instead. Now my only recent memory of the Messiah was a performance at St. Mary’s College, on bleachers that got increasingly harder on the backside as hour after hour dragged (okay, it was good music, but after a while….) on. So there was some apprehension on my part as we filed into the Church where it was held, and relieved to see there was padding on the seats for mine, we settled in. Come to find out they contracted the complete Messiah into the “Birth” or Christmas portion so it wasn’t a marathon. It featured the normal COSMIC orchestra, but added the COSMIC Community Chorus and four soloists. There was a tenor, a bass, an alto, and a soprano that sang the various portions. I’m even less a judge of vocals, but I thought they performed very well. I don’t know much about the structure of this type of music, but here were “recitatives”, “recitatives accompanied”, “airs” and Chorus selections. Again showing my lack of real knowledge of the Messiah, each were selected verses from the Bible. There was one “air” that in its entirety is: “But who may abide the day of His coming, and who shall stand when He appeareth? For He is like a refiner’s fire (Malachi 3 : 3)”. What’s that take to recite? Maybe 10 seconds? Well, the bass singer turned that into about five minutes of song (is that the right word? – way out of my element here) by repeating it maybe 6 or 7 times. Now, to be perfectly clear, I do not say this as a criticism, it was lovely music well performed, but just an observation. The concert ended with Chorus, soloists, and audience (as requested by Maestro Lande) all singing the Hallelujah Chorus, well known by everybody. Heartwarming. Like homemade food, local music, while maybe not as polished as you might get “up the road”, is unique and special. We have to support these things. Further concerts of COSMIC are slated for February 27/28 and May 15/16. come on out and enjoy them. No country music here. 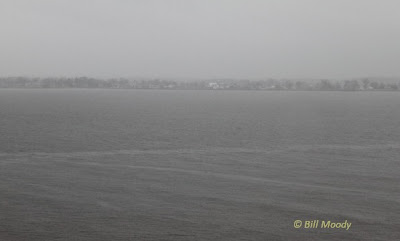 And allowed the mood to match. A good day for watching sports, consuming cookies, avoiding planning for the upcoming journey, and stuff like that.

This morning, there was fog on the boats 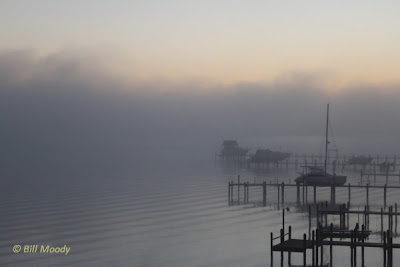 And a bridge to nowhere 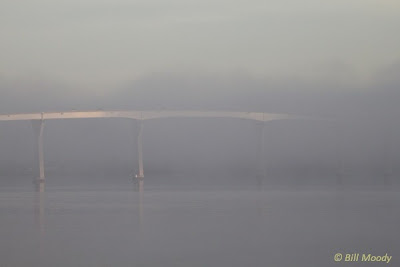 But eventually old sol did it’s work on the bridge 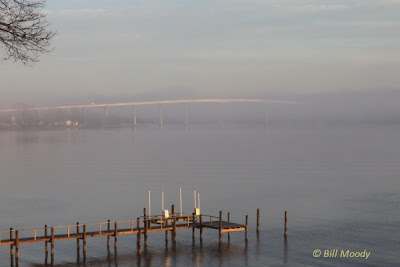 and a nice start to a Monday (retirement is good, by the way) 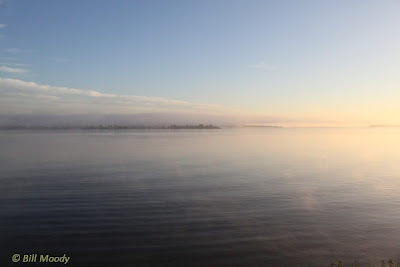 and just maybe today you don't have to
DFD
Posted by Bottom Feeder at 9:07 AM