Funny, about a month from today we will be returning to France, this time for a dry land visit in the Normandy region.


So finally we will end the chronicles of what proved to be a wonderful trip that will (hopefully!) live in our memory for a long time.  Car keys, no... food yes...


I think it’s fitting that we end by talking just a bit about the food in general.  One trick pony..


It is hard to divorce perception from reality and I try to do that, but it honestly appears to me that awareness of food and the enjoyment of same is just different in France than in America.  I probably wouldn’t go so far as to call it a “live to eat and eat to live” difference but something along those lines.  It somehow seems more of an integral part of their lives.  Witness the cafes all over the place in Paris.  Always well attended, and not just by tourists.  It’s what they do, it’s part of their culture.


Anyway food (and wine) was certainly the focus of our barge journey, and all twelve of us enjoyed every meal and glass with enthusiasm.  No foodie silliness, just the pleasure of being with people you like and sharing good things on a plate (and in a glass).  As I mentioned last time, there was a little packet at our final dinner, and in that packet was the menu for every dinner aboard, 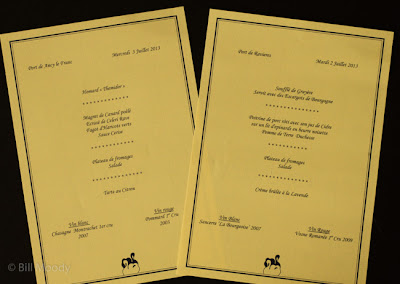 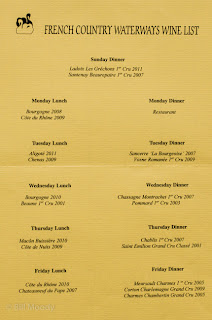 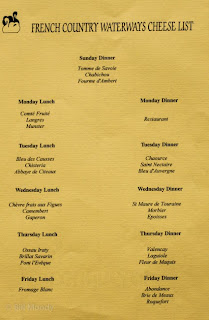 That were served on the barge


The food on the barge was wonderful.   I wish I could have gotten a couple of the recipes, especially one of the potato salads we had and gorgeous sauce that was glazed for a fish dish one afternoon.  I may still ask them for that.


One of the reasons we chose this route (Alsace and Loire to go!) was that it included a meal at a Michelin Three Star restaurant: Relais Bernard Loiseau.   It is located in the small town of Saulieu and is kind of an inn along with the restaurant.  As you might recall it's namesake committed suicide ten years ago.  It was speculated that one reason was the specter of losing his third star, but as usual there's more to the story.  Anyway it's kind of unassuming on the outside. 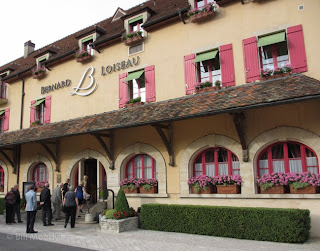 But it is beautifully decorated inside, and we were to be in a separate room but did go through the restaurant past elegant individual tables. 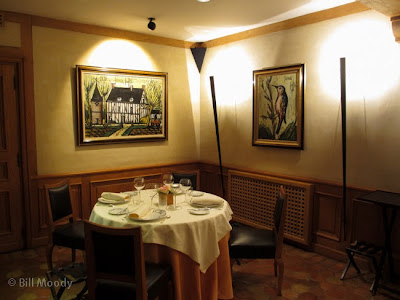 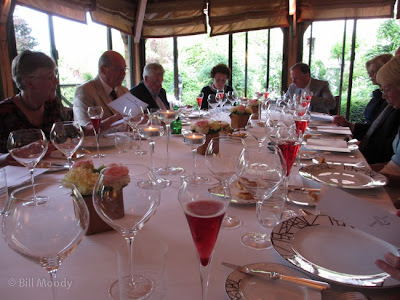 Under a beautiful wooden ceiling 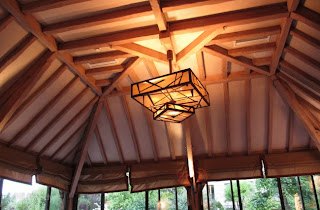 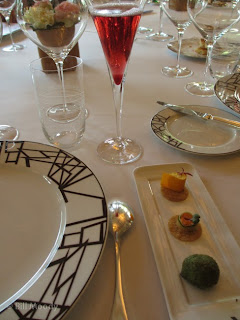 There was a glass of welcoming sparkling wine for us along with the amuse bouche..  We each had our own special menu for the occasion 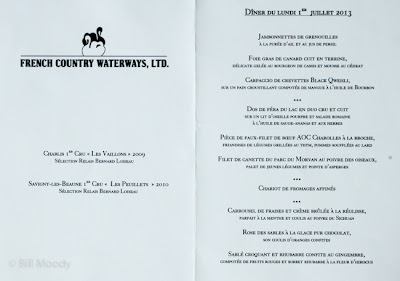 with three choices in each of the three main categories. of course cheese is ALWAYS served.
Besides the items you chose from the menu, little bits of something kept appearing between courses.  I tried to be discreet and hold down the pictures (reminded by elbows in ribs from MFO) so I only have a shot of my first course of the Jambonnettes de Grenouilles (Leg o’ the frog) the presentation of which reflected the style of the rest of the courses. 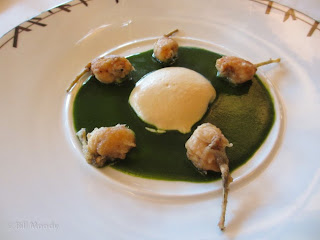 Small portions, artfully placed, all lightly sauced and all very good.  As with all good restaurants each item on the plate stood out on its own.  Referring to the menu above, MFO selected the Crevettes, Filet de Boeuf, and the Fraises.


Besides the Grenouilles (supposedly a house specialty), the Filet de Canette, and the Chocolat dessert. 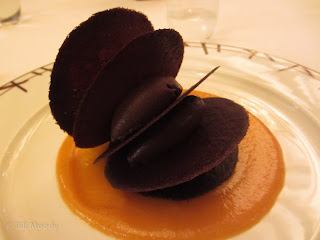 As I said, all along the way, things kept appearing and each was explained (I didn’t pay attention) 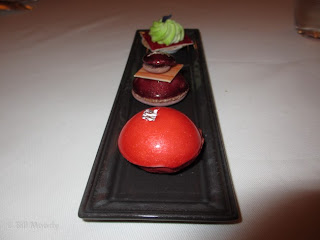 Wow.  And of course between the entrée and the dessert course was the always present “Chariot de Fromages Affinés” 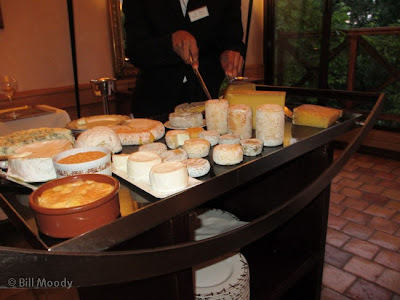 Presented with a bewildering array of cheeses, mercifully we were asked if we would like goat, sheep, or cow, hard, soft, mild, strong, etc., and then several were placed on your plate.  What a meal.  It did, however present me with a bit of a problem.
musings and ramblings begin here
Up until this trip, the best meal of my life was at another three starred place, Lameloise in Chagny, on our first French Country Waterways journey in June of 1998.  I could not help myself from comparing them.
I am not sure I expected the meal at Relais to surpass the other, but it did not knock Lameloise off the pedestal.  I have been thinking about why I feel that way.  (One of the things I like about doing this blog is that it forces me to put things down on "paper" and sometimes makes me think more clearly (quite a feat), so maybe this is as much for me as you loyal readers).
The way our itinerary worked out, we visited RBL on our first full day on the barge (Monday).  So maybe one factor was that we were still a bit revved up from the travel and not quite yet in a state of mind to appreciate the experience fully.  Another thought is that the Lameloise the food was more “traditional” and prepared with classic French preparation and presentation.  Here is the menu from Lameloise in 1998 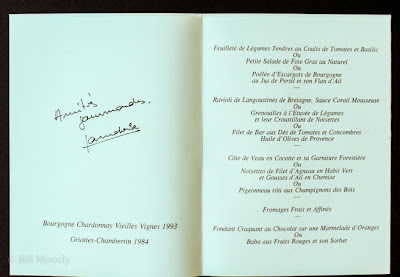 Some of the choices were the same (Grenouilles), but you don’t see such traditional French items like veal, lamb, and pigeon on Bernard’s menu, plus Lameloise had the more traditional progression of a starter, then a fish course, followed by a meat course, and of course cheeses and dessert.  The menu at Relais eliminated the fish course and incorporated seafood into the entrée selections.  I suppose economy over the intervening 15 years may have had an effect.  While Lameloise presentation was more traditional, again times have changed and  I would place Bernard’s presentation in the “nouveau” category.  Things move on.
What was common to both meals however, was the attention to the smallest detail of service.  For instance upon seating, a small little rack appeared beside the ladies chair to hold their purse.  Ladies were always served first, serving with one arm, the other arm always behind servers back, wine glasses somehow were always full, silver replaced as necessary between courses, pand roper utensils laid for the upcoming dishes, things cleared at the appropriate time, on and on.  You hardly ever noticed the servers.


It was indeed a wonderful experience, and I don’t mean to quibble over eating in two three star restaurants, both were memorable and I’m lucky to have experienced each.  Not to mention the food on the barge which was definitely (IMHO) in the "starred" category.


Okay, that’s it. Thank you for following our journeys and we’ll begin another in that scant 30 days.  Of course we will now be assured that all will be