What turned out to be a very busy weekend (Friday is included in a retirement “weekend”) started with MFO attending the (2nd) Southern Maryland Tobacco Barn Summit. The first was over 4 years ago, so this was sort of a fresh start. It was held in King’s Landing Park up near Huntingtown in Calvert County with a purpose to discuss preservation of the dwindling number of tobacco barns in Southern Maryland. Anybody who has driven around the county has seen them sitting in various stages of disrepair although some still remain in (some non-tobacco) use and in better shape. 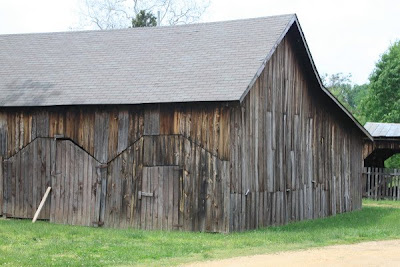 The summit brought together several preservation oriented organizations such as Preservation Maryland, the Maryland Historical Trust, the Tobacco Barn Coalition, agricultural people, and what turned out to be a fair amount of barn owners. MFO was attending in her capacity of serving on the St. Mary’s County Historic Preservation Commission, and was attending out of general interest as were several others. I didn’t count noses, but I suspect there were over 50 or 60 people there.

After opening remarks, a presentation was made by an architectural historian entitled “Architectural History of Southern Maryland Tobacco Barns”. It was filled with pictures and drawings and stuff, pretty interesting. They have sort of categorized the barns into 4 air curing styles and one “flue curing”. The air curing ones are mostly along chronological lines, the earliest (17th and 18th century) being “earthfast” which also had a feature called a “false plate roof” which I didn’t exactly understand, followed by a “log tobacco house”, then 19th century, and into the 20th when they started featuring “drive throughs” with the advent of motorized farm equipment. The unique “flue” cured barns were relatively rare, and depended on an internal heat source to dry the tobacco. There were only 5 (known) of these houses (the correct term apparently) in Maryland. Very informative presentation and I’m trying to see if I can get a copy.

The next presentation was by a representative from the “coalition” and she spoke about the efforts and results of preservation to date. Not a whole lot, but they have managed to get 5 barns on the National Register of Historic Places, a good start. Here's a sample for a little more reading

After that we broke up into little groups to brainstorm things like “adaptive reuse”; “barn preservation tools” and so forth. Some good ideas came out of that, like increasing awareness by having a “barn tour”, or maybe somehow starting a “tobacco museum” that tells the story of the tobacco culture. Of course many of our local museums talk about the tobacco history of Maryland, but only in an incidental way.

Another person wondered if the current sort of “anti tobacco” climate in some ways tarnishes the image of the barns, hence less interest in preserving them. A “barn owner” wanted to know how she could find resources to help her in “re-constructing” her barn as there doesn’t seem to be anybody around (in her opinion) that knows the older construction techniques. Of course all of this costs money, time and effort and we all know how tough all of those are these days.

But, it was a very informative session, and everybody agreed that another should follow “soon”. We’ll see.

That evening we continued our historical bent as we trundled down to Historic St. Mary’s City for an event that featured a little talk by Bill Kelso, a much respected and renown archeologist associated with Jamestown in Virginia. He was pretty much responsible for locating the original fort which was popularly believed to have been under water. His topic was what they found in several wells there, apparently used for trash and also sometimes to hide things. Neat stuff with lots of pictures and little video clips. Of particular interest was a little shot of somebody pulling a whole pike (not the fish) out of the muck. Interesting times gone by.

Somehow the older one gets, the more interest there is in this kind of stuff. Too bad there’s nothing to do around here.

Oh, and the next day there was a fund raiser for the Hospice House at Sotterley that revolved around the Kentucky Derby, where I had a chance to try “Henry Bain” sauce. The history of which is left as an exercise for the reader…

Maybe tomorrow some interesting restaurant stuff… (this is technically called a teaser).

DFD
Posted by Bottom Feeder at 9:01 AM